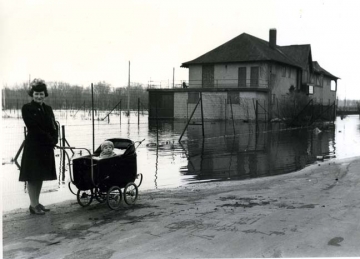 The connection between a 139-year-old tennis club on Cameron Avenue and the community in Old Ottawa South has always been strong. Now, with new municipal recognition and a substantial federal grant to support restoration of a century-old clubhouse, the connection is getting stronger.

Nearly a century ago, a prominent architect – John Albert Ewart (1872-1964) – lived in a house on Cameron (now home to the May Court Club and Hospice). Ewart was a big deal in early-20th-century Ottawa. The son of Dominion architect, David Ewart, he designed many of Ottawa’s finest commercial blocks in his day, as well as civic buildings such as the Glebe Collegiate, the Civic Hospital and, in this neighbourhood, Southminster United Church and the Sunnyside Public Library. In his spare time, he played tennis just down the street from his house.

In 1922, when the Ottawa Tennis and Lawn Bowling Club (OTLBC) moved into the neighbourhood, Ewart stepped forward in fine community spirit and offered to design a clubhouse. He chose a popular style of the day, Tudor Revival, for the building and included several meeting places on the second storey and a large verandah overlooking the courts below. When the plans were complete, they were realized by George L. Crain & Sons. Crain was president of the club at the time and head of a local construction firm.

The doors of the clubhouse opened on June 4, 1923, with some 1,500 people pouring into the community from all over Ottawa. The big draw at the inaugural tournament was William T. Tilden, a champion at Wimbledon and in the United States. A local newspaper called him “the finest player in the world.” Several Canadian luminaries also came to compete, including Willard F. Crocker, a Montreal player who won repeatedly at the Canadian Open in the 1920s.

Jump forward almost a century and in 2019 the City of Ottawa awarded the club house building a heritage designation. This honour recognizes the clubhouse not only as an outstanding example of an old-style sporting venue but also as an important cultural landmark. The designation underscores the importance of the club to neighbourhood heritage, both architectural and cultural. The club today has a key role to play as the steward of that heritage. As such, the club has for several years now been planning and fund-raising for restoration and renewal of the clubhouse.

The club’s progress is heartening. In 2019, the OTLBC was honoured by a substantial federal heritage grant from Canadian Heritage , given in part to help restore the clubhouse and also to enhance its usefulness as a year-round facility where the community can host a variety of cultural events. The grant is for a maximum of $375,000, depending on how much the club is able to provide in matching funds.

The grant is a timely one. “Nearly a century of wear and tear has taken its toll on the clubhouse,” says Executive Director Maria Pierre-Noel. “We’ve seen everything – winters that have damaged an unheated building, spring floods and inadequate funding for repairs and upgrading that have forced us to patch over problems rather than solving them. Now, with this fund-raising effort and restoration project, we have a chance to repair the building from the foundations up, to restore the fabric and to install new mechanical systems. We want to make sure that the clubhouse is still here a hundred years from now and that it serves the community even better – for example, with universal accessibility.”

Old Ottawa South stands to benefit from this restoration and not only through the preservation of an architectural landmark. It is the club’s vision to restore the building as a year-round facility and meeting place for the whole community, and it has made great progress. The initial goal was to raise $1 million by 2020. Donors have proven very generous, and to date the club has raised close to $700,000. If it reaches the target in the near future, the first phase of the project might be launched as soon as 2021. A second phase of work will depend on the club’s ability to raise another $1.6 million.

The OTLBC invites the community of Old Ottawa South to come on board as partners in the exciting work of restoring the clubhouse and opening it to new and broader kinds of use. As a tennis club and now, more and more, as a community meeting place, the OTLBC is planning, working and actively raising funds to ensure that it can go on helping people in the neighbourhood and beyond to live more satisfying and connected lives. You can help the club to fulfill that mission.

To donate to the Clubhouse Restoration Project, please visit OTLBC.com/donate and click on the “Donate Here” button. Tax receipts can be issued.

Jenny Mitchell is the President and Chair of the OTLBC Fundraising Committee.

Featured in the December 2020 OSCAR.

More in this category: « A Meditation on Ottawa South Cleaning the Capital »